The korean Rhea Jeong has come up with 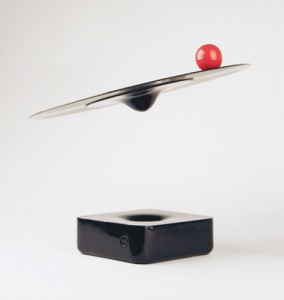 an interesting concept for a vinyl player: a hovering one. He calls it the Void LP player. The red ball is the motorized record player with the speaker and all built in, and it’s actually inspired  by the already existing record player Vinyl Killer.

In theory, the player actually might work. The hovering generated by magnetic control, the  little red ball player already having cousins in reality and the spinning not really being needed (but probably being present anyhow), due to the little red self moving record player, are all quite reasonable ingredients to assemble this little music machine.

The road of development, from concept to product, might however be a long and tricky one, all because of the slight friction that tend to appear between reality and theory. But it could definitely be doable.