Since the Swedish power market was divided into four bidding zones in November 2011, the feared “unfair” spread in prices between north and south has so far not shown itself. The prices development is currently converging for all four zones, which can be seen in Nord Pool spots price statistics. Perhaps the spread will show itself if the demand exceeds the production capacity, which is not entirely unlikely in the country with one of the worlds worst uptime on their nuclear power plants. But until then the so far mild winter in Scandinavia might result in a more stable price during 2012, and perhaps some possibility for Swedish base industry to survive a little longer. 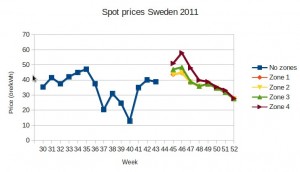